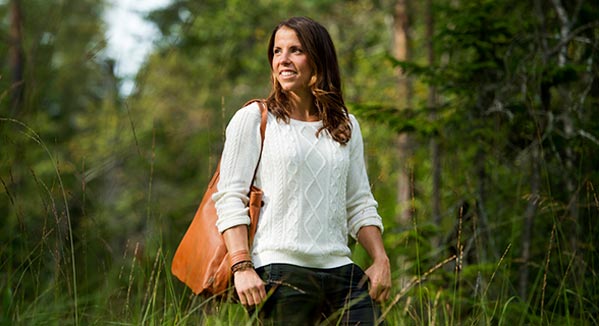 The Tornedalian wilderness ancient power is flowing in Charlotte’s blood. She grew up among the pine heaths, marshes and rough winters, nature is a part of who she is. On Tärendös marshes, she challenged her strength and gained her force. That's where she likes it best, especially a clear and fresh autumn day with newly frozen ground under her running shoes; surrounded by the nature's beautiful color spectacle.

Charlotte took part in her first ski race as a 7-year-old. It was her grandfather, Bengt, who beheld her talent and signed her. Classmates from elementary school testifies that she was yards ahead of everyone else during ski races at school. An ambitious magic that came to grew over the years and today, 20 years later she is a historic skier who put Tärendö on the map. Something that meant a lot to the municipality of Pajala and Tornedalen.

As her career grows, the visits to her home village unfortunately gets fewer and fewer. To keep the Tornedalian wilderness ancient power, she wears Keros. She describes her Kero Vintage bag urbane and wear it with pride worldwide.