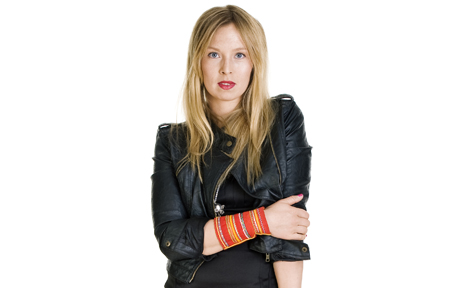 Sofia Jannok is a singer, musician and social critic from Gällivare. Through her music she stands up for the acceptance of the original inhabitants of Sweden – the Samis, and their human rights. It all started when she was 11 years old, together with a friend, Sofia performed at the Swedish Sami National Association annual meeting.

Sofia was discovered as an artist first when she sang joik music covers for children at the Ethnographic Museum in Stockholm. The Swedish tv-channel TV3 discovered her and she ended up in a talent show called “Talangjakten” where she came to reach the final. Since 2005, she has worked with music on full time and has released several albums. Some of her qualifications is that she expressed Waterloo in Sami as intermission in the Swedish version of Eurovison Song Contest, had 100's of tours in the US, China and Europe and awarded with numerous awards and media attention.

The music is grand and rich in contrasts. She draws its inspiration and strength from a mix of various musical genres like joik, ballads, pop and jazz, with lyrics in both Sami, Swedish and English. The lyrics are based on her own life where the fight for all human's natural place, whether they are originals, immigrants, girls or boys; is important. In order to clarify her message, she puts extra energy on  the “middle talk” between her songs while performing. It's her way to make a difference and take the fight for human rights further.

- What I like about Keros is that their products works with my frock, my jeans and when I perform. It’s the closest I can get to the traditional cahccegat without having to sew them myself. Also it’s a pleasure being able to bring a touch of north wherever in the world I travel.