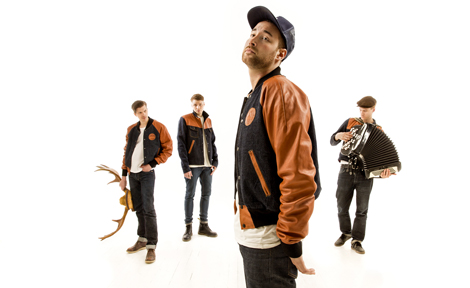 Zacke is a swedish rap artist from Luleå. He has a rare ability to combine hardcore swing with innovative and well-written lyrics. He started to rap at the age of 15 and is today famous for his razor sharp lyricism, acrobatic tongue and personal expression on the Swedish hip-hop scene.

His debut album "Visst är det vackert" was released in 2010 and became a success which gave him the award for This year’s hip hop at the Manifest Awards 2011. In 2013 he released his second album "Renhjärtat" (which refers to both “reindeer heart” and “pure heart” in Swedish). The album title refers to both his homeland, Norrbotten, as well as the honesty he wants to convey through his music. Both albums are produced by the world producer and good friend "Mördar-Anders" Rensfeldt from the band Movits!. But that's not the only cooperation he has with Movits!, Together this Luleå quartet released songs like "Int äre nå", "Spela mig på radion", "Huvudvärken" and "Halvvägs".